Why would she come alone and with four children, under the age of ten, in tow? Hosea Baker questions a multitude of scenarios when his younger sister makes the trip from Sodus, New York, to live near him and the Shiawassee River.

Rhoda Seymour joins the Baker family in the spring of 1836 in what will soon be Newburg, Michigan. Hosea questions her motives, despite the joy it brings him. Yet as winter clouds form, Hosea finds his sister in a ramshackle cabin with a sagging roof. Where is her husband who’d promised to follow her to Michigan?

Before he can sort through the surprise of his sister’s arrival, Hosea embarks on a new venture. By supplying fresh cut lumber, the community changes into an established village. With the help of an educated physician and neighbors who come to the rescue, Hosea’s village gains a name. As supervisor of the township, Hosea can see a promising future for his clearing by the river. Yet why does the route to the cemetery grow too familiar? Has Doctor Nicholas Harder arrived too late? Hosea suspects his sister is hiding behind a façade, yet only the strongest souls endure the hardships in the Michigan wilderness. 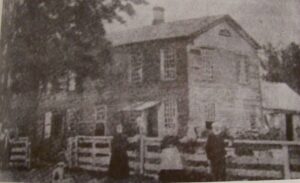